I love working on cutting-edge technologies and challenging tasks where I can efficiently contribute my skills on enhancements to the project and build my professional career.

I currently work on large-scale storage solutions (up to thousands of servers / 100 petabytes) as a Senior Software Engineer at Scality (Paris).

I have an experience in team management since I have worked for 4 years at the Exascale Computing Laboratory (Intel) as a project leader and also leaded a Team at DataDirect Networks.

In addition, I am in charge of the System Administration lectures and the UNIX tutorials at the ISTY engineering school, Versailles / Vélizy-Villacoublay.

I am a 10+ year-experienced engineer with a strong background in software development on Linux. As an example, I worked as an expert engineer and a project manager (4 to 6 members) at the Exascale Computing Laboratory (Intel) on the design and implementation of a research tool (CTI) used to perform application characterization analysis. It was deployed in the CORIA laboratory (Rouen) to provide performance monitoring (automatic generation of weekly reports presenting the last performance analysis of a combustion simulator). For more information regarding it, please check out the official website.

At DDN, I wrote a High Performance Computing oriented framework from scratch to enable test automation on a burst buffer in a distributed environment. The tool includes a scalable system deployment on Amazon EC2 ( up to 1000 nodes), a complete API to execute arbitrary code remotely, a performance testing system, a chart generator, a defect reproducer, and many other internal modules. At the end, I was in charge of the team management (engineers, team size: 3 to 5) and the research and development of the framework. The tool is fully operational, and used in Maryland (USA), Pune (India), and Paris (France) to extensively test multiple DDN's products.

I am also in charge of the System Administration lectures and the UNIX tutorials at the ISTY engineering school, Versailles / Vélizy-Villacoublay. I obtained a five-year degree (equivalent to the European master degree of computer science) in this school, and was ranked first during the three years.

A generic framework to remotely control a Raspberry Pi.

NestoRPi
I designed and built a completely open-source robot from scratch. Based on the Raspberry Pi (RPi) single board computer, it is remotely controlled using a home made and open-sourced tool called NestoRPi Engine. I wrote this tool in a generic way, making it easy to adapt to many kinds of use cases on the RPi (not only robots!). It can handle multiple devices through the GPIOs and provide a Web User Interface to control them. Finally, it supports the RPi hardware encoder (using MMAL) as well as WebRTC to provide a very low latency video (below 200 ms) in high quality (H264 1080p 30 fps).
10,000

Back To The Future: The Ride

A Virtual Reality application to reproduce the ride using a home-made motion simulator. 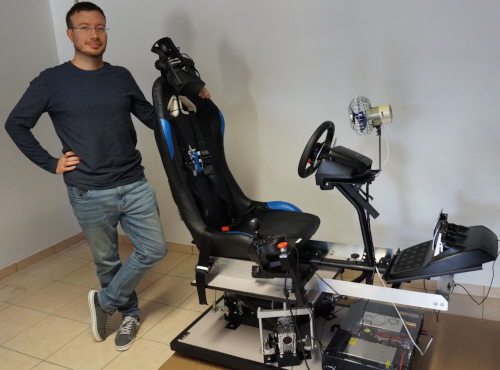 Back to the Future: The Ride (BTTFTR) was a simulator ride at Universal Studios theme parks, located at Universal Studios Florida and Universal Studios Hollywood. The simulator was based on the BTTF movies. Sadly, it was permanently closed down in 2007. This project is an attempt to make the ride back to life in the most realistic possible way. The original footage was restored and remastered and is available online. This project provides a virtual reality environment to enjoy it (where the movie theater is reproduced), using Unity and an Oculus Rift or HTC Vive. On top of that, a home made simulator along with a fan is used to add some magic. This project is compatible with SimTools to support a 3DOF motion simulator and a fan.
Source code
Article on the Scality online magazine
Video 1
Video 2

Feel free to reach out to me.
Email
GPG Key